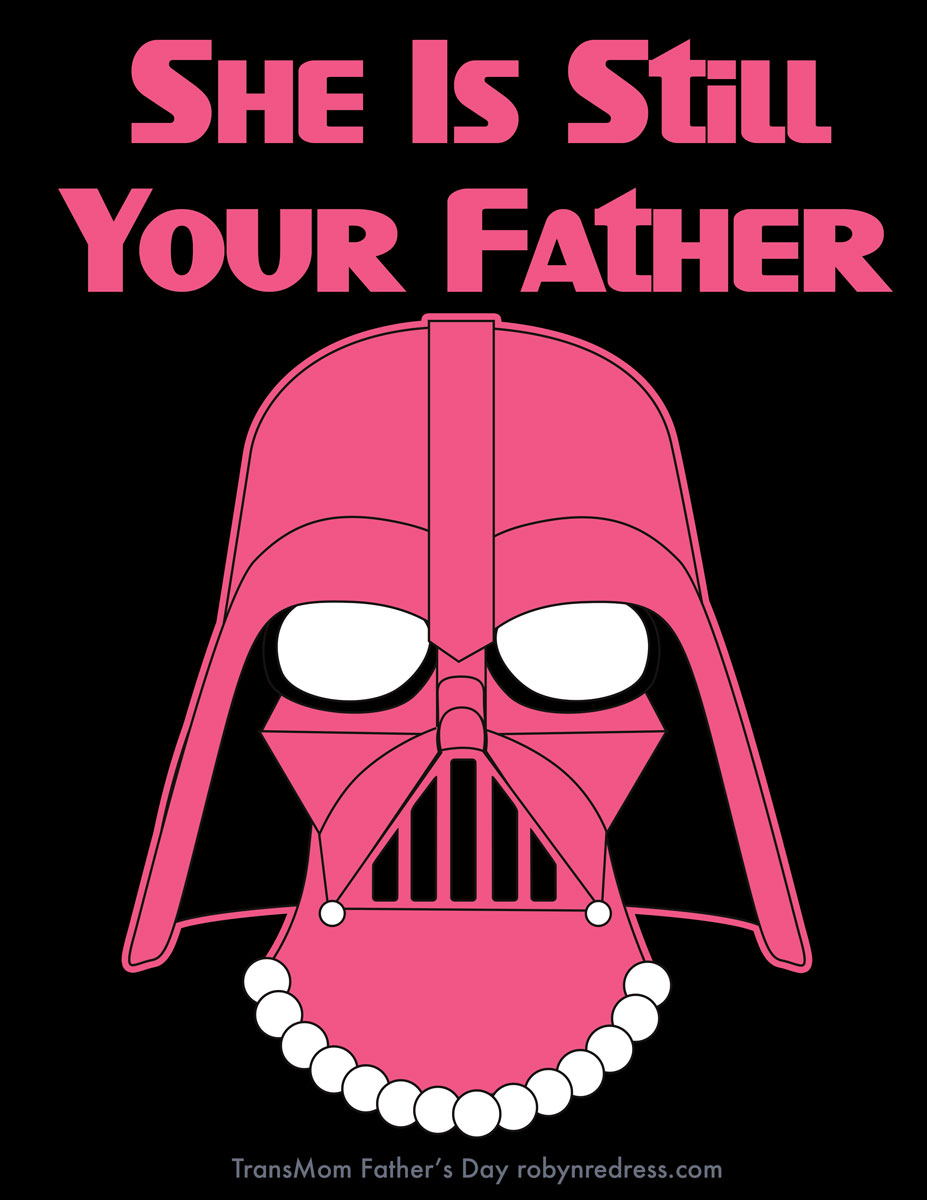 I am, and will always be, a Father.

No matter what my gender identity was then or now…FATHERING HAPPENED. I fathered someone into existence. Nothing can ever change that and there’s few semantic tricks that can create satisfying words for me to describe what that means other than Father.

Still, I’d rather we not use that word or any of it’s related names.

My son doesn’t use any of the old names for me anymore. At first he insisted on the right to use he/him pronouns and to call me Dad and I didn’t argue with him, but asked maybe can we not do so in public, as shouting “Daaaaaaaaddddd” across the aisle at the grocery store drew a lot of funny looks.

In a lovely twist of support, however, he required his friends to switch to female pronouns which they used with very few exceptions. Kids are so cool flexible, at least the ones in our Bay Area circle.

Still, being misgendered can be an unsettling experience to say the least and the ONE person who has misgendered me the most during transition is my loving son. Eventually things started to change and for my comfort I needed to ask him for the correct pronouns and name, as being called Dad 100 times in a day began to wear on me. I tried to be very gentle with the correction, very patient, but sometimes it stung, especially when I was tired and stressed and feeling emotional, which accounted for many of my days in early transition.

I didn’t take it personally, it was never an intentional slight from him, just easy to forget. 8 and 9 year old brains are powerful things, but they also can forget where they are going on the way to the bathroom! So it’s a hard habit to break, calling your father”Dad”.

We never successfully came up with a replacement moniker for Dad. It was enough to get him to just call me by my new name. I dislike “Maddy” or “Moppa”, they don’t resonate. I pitched for “Dama”, which is a mix of Dad and Mama and has the added benefit of being the Spanish word for Lady. That never stuck.

So to my son I am simply “Robyn”, and it always makes me happy to hear my name, but sometimes it sounds disrespectful. My own Dad would threaten violence if I used his name, so I bristle sometimes. He’s solid with pronouns now. When he was ready, or maybe when I was sufficiently feminine?, or some combination of the two, he called me she and her without exception.

It wasn’t just a negotiation with my son, but also his mother. Any form of “Mom” was out of the question with my partner, and I did not fight her (much) on that. She felt that it intruded on territory she had hard-earned the old fashioned way. The words “male privilege” were used, as gently as possible, but firmly. I could see her point. As far as I was concerned, affirming my gender identity did not entitle me to claim the label of Mother.

That is what was right for myself and my family. There are not hard and fast rules, these are delicate questions with many personal, cultural and political layers to them.

For instance, I have a dear friend who felt very strongly about it and fought hard to get the “Mom”or “Momma”, and I support her entirely.  Her spouse granted the request as a Mother’s Day surprise, it was the sweetest damn thing I’ve seen. She’s a Mom to her core in a way I am not.

I did not enter transition with maternal feelings. One of my wake-up calls early on was that I was going to have to be a Mom of…SOME kind; The colossally self-centered experience of becoming who you are and exploring a new life and sexuality was going to be constrained by being a feminine parent. It was a beautiful revelation that gave me a sense of purpose and gravity, but it was also a bit of a buzz kill, honestly. “Slow it down, Girl, you have responsibilities”.

As news began to get out that I was serious about transitioning, people would ask “What about your son?”. A ton of assumptions hung in that statement.

How would it affect his own sense of identity?(it didn’t, and why would it? You couldn’t talk this kid into being something he’s not anymore than you could convince him to like televised sports. It ain’t gonna happen and I am resigned to watching football without my boy.).

Will this warp him somehow? (How can honest and age appropriate information delivered thoughtfully possibly warp someone? I’d propose that whatever “warped” me way back when was due to the secrecy and layers of taboo that came with it.) As my wife pointed out, there unspoken statement is the fear that we are doing harm to our child.

The fact is kids adapt to this way better than adults. Our boy said he was fine and didn’t like to dwell on the subject. Just to be safe we had several sessions with a child psychologist and got the thumbs up from her and congratulations on being loving and responsible parents.

The objection that hit me the hardest was the one that came from my own father: His suggestion that I was abandoning my responsibilities to follow a selfish and deluded idea and that as a father it was my job to make a sacrifice and keep my commitments to my child and his mother.

This advice was colored by his own shame and having done the opposite with me when I grew up. My parents divorced and my dad fled to the wilds of Alaska, literally the other side of the planet from us, only to be seen on bi-annual holidays and summers.  By contrast, I was moving heaven and earth to stay as close to my son as possible, continuing to love in the house and co-parenting through a decidedly rocky period in our life. To have been able to make this transition in the house every day with my son was very important to me and I think it minimized the loss for him.

It’s a loss, of course. Of all the arguments against me, the one that tugs hard at my heart is that I stole his father away. That one day he will look at that handsome guy with the goatee and the big smile and be sad he lost that person. But that is probably more my fear than his. I hope. Whatever the case, it’s part of his life history now, there’s nothing I could do to prevent it and I have to honor the truth of what was and the loss that may be felt. I was a cool Dad.

And I still am, of course, we have the same relationship. Nothing prevents me from engaging in light saber duels and Nerf gun firefights in a dress. He and I are still nerds together, obsessing over the details of Star Wars or Pokemon or whatever he’s into at the time. I still read to him at night, I just use my new voice (it’s great practice). When the time comes I will have the Father-Son conversations he needs and I will share my experience of life as a young man, because that is what I knew and that is what I can give him.

When it’s called for—or when I get pushed–I can still bust out the DAD VOICE, which is not so much a problem in how it sounds than how it feels. Sometimes that feels a little hard for me, running that Father energy is very gender-ing, and for me brings up irritating memories of my own father, whose masculine modeling left a strong and unwelcome impression on me. I feel like my lifetime performance of masculine was just a mimicking of my Dad’s for good and bad. I hear him in me and I cringe.

Still. I’m very proud to be a Father, even if we never use that word. I’m intensely grateful that I had the experience and that I have this person to witness me and love me as I go forward. My goal is to live up to all of my responsibilities to him while being true to myself and taking care of myself. Changing gender was an act of self-care and preservation. On the airplane they tell you to put your own oxygen mask on first and then attend to your child. It’s my job to keep myself healthy and strong so I can be at my best for him.

So today I claim Father’s Day for myself. I do it filled with joy and that I no longer have to be the man who did the Fathering, and deep gratitude for the role that man passed on to me.